Midnight at the Oasis
​
by Robb T. White

About the author:
Born and raised in Northeastern Ohio, Robb White has published several crime, noir, and hardboiled novels as well as crime, horror, and mainstream stories magazines such as Down & Out, Mystery Weekly, Tough, Mystery Tribune, Switchblade, and Near to the Knuckle. His two ongoing series feature private eyes Thomas Haftmann of Jefferson-on-the-Lake & Raimo Jarvi of Northtown, Ohio.

“Get enough sleep, kid?”
“Yeah, Uncle. Quit asking me.”
“Told you not to call me ‘Uncle.’ Makes me feel old.”
“You call me ‘kid.’ You are old to me.”
“You’re twenty-five, Nate. I’m thirty-one.”
My uncle, Rexford Allan Roisch, liked to call himself “the Notorious Double-R.” He looked older. His bent nose and that jagged white scar running down the right side of his face from hairline to neck made the contrast to his perfect teeth striking. “A battle scar,” he called it, from his years in Pelican Bay when some Mexican Mafia guy chest-bumped him in the yard and a beef resulted. But my dad told me his younger brother was jumped in the chow-line for failing to pay off a gambling debt. Like his shiny dental implants, my uncle’s stories were always a brick short of truthful.
“Topanga Canyon Road coming up. Look sharp,” he said.
Moonlight bathed everything inside the car and out in a weird light, even his profile. Rex cursed the wobbly Harvest Moon following us all the way from the Pacific Coast Highway. Dirty deeds are best done in the dark.
The ribbing began as soon as he picked me up outside my apartment on East Fifth. “My brother must be proud of his son, living in Skid Row.”
“I’m six blocks from there, Rex.”
Different this time, however, because his usual good-natured joshing had an edge to it this time. Pre-job nerves, I told myself.
He could flip his moods on and off like a light-switch. When the walkie-talkie between us crackled into life, he’d wave his hand for silence. Most I understood—locations to deploy teams of firefighters to deploy as the wildfire above the canyons raged out of control.
“They’re moving firefighters away from the ridge above
Entrado Drive.”
“Is that good?”
“Pope shit in the woods?”
It meant we’d have the mostly evacuated neighborhood to ourselves without roadblocks.
“What if they all don’t follow the orders to leave?”
“Stop worrying, kid.”
I spotted the butt of his silver-and-black Taurus sticking out of a shoulder holster when he leaned over to let me in the car. We used that gun to shoot jackrabbits near the bluffs off Mulholland.
“Then why bring the pistola?”
“Protection, homie. Some of those rich creeps leave guard dogs behind when they evacuate. They don’t care if their houses burn as long as they don’t get their shit stolen. Insurance or something.”
That sounded lame. California might have altered its “Three Strikes” Law, but it existed, and my uncle qualified as an habitual offender if anybody did. At twelve, Rex terrorized his neighborhood until he was ordered off to one of those juvenile “gladiator schools”. At sixteen, he was sent back, this time to Tulare for “straightening out”. Adult slammers were the next stop on his life’s journey that finally hit the skids when sentenced to a five-year bid in Pelican Bay. His repertoire included armed robbery, agg assault, felony theft, and drunk & disorderly. “Straightening out” didn’t make the list.
“Balls McCarthy, there he is!”
The deputy’s sheriff’s turquoise and cherry lights were strobing the night air, bouncing off the stop sign and the manicured lawn of somebody’s fancy house.
“He’s blocking the Canyon Road.”
The closer we got to the cruiser and his flashing lights, the more the thudding in my ears from the blood pounding in my head sounded.
Like the sample? Read the whole story in the Summer 2021 issue of Guilty Crime Story Magazine!
Buy the issue here! 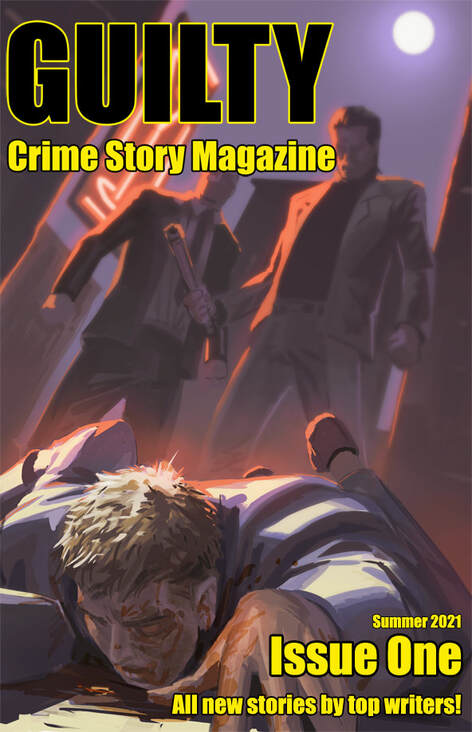